Along with the Nostalgic Synchronic Etudes and the prepared digital piano software, we are releasing a printed volume of Mikroetudes—short pieces, inspired by the Bartók Mikrokosmos—for prepared digital piano by a collection of composers. These should be useful for students or really anyone interested in having a go at the instrument and seeing what kinds of things people have tried with it to this point. Read on below….

The volume, which includes 24 mikroetudes, is available both in print and pdf:

An example mikroetude, Didymus (featuring adaptive tuning: there is a rough performance at the end of this bitKlavier setup video), and Dan’s Forward to the volume:

I grew up in a house full of harpsichords, clavichords, and lutes that my parents built, and with a family that played them with varying levels of proficiency (my sister, Jennifer, is an expert pianist). I quit piano lessons too early, claiming my violin studies were enough, but somehow ended up the one who tuned the harpsichord and its multiple sets of strings. I loved it. I also loved when it was out of tune, especially when its multiple sets which should have been in unison were instead “out” at some unseemly interval, sounding, as the acousticians say, “rough.” I distinctly remember one party when my friends egged me on to play the Bach D-minor two-part Invention with the harpsichord in such a “rough” state; somehow this odd party trick would inspire fits of gleeful twisted dancing—I had unusual friends!

The point being: I grew up with my hands inside instruments of various sorts, and I was used to messing with these instruments, sometimes playing them myself, and other times getting them ready for others to play. Somehow, decades later, I’m still doing that, whether writing new music, hacking up new instruments, or cross-tuning my fiddle; it’s incredibly inspiring! And this is the story of the “prepared digital piano,” the Nostalgic Synchronic Etudes, and this volume.

I built the prepared digital piano to explore a number of musical ideas, but also just because I like to build things and to program. After sharing some of the early Nostalgic Synchronic Etudes with a few friends and in a couple different venues, I began getting requests for the instrument, and that’s where the idea for this volume came from: wouldn’t it be great to have a volume of short pieces that various people write for instrument, as a way for them to try writing for the instrument, but also to create something that other pianists and musicians could play to explore the instrument and the different musical challenges and ideas it presents?

Bartók’s Mikrokosmos was an initial point of reference, and gave us the title for this volume (and the suggestion that there may be more to come), but this has inevitably turned out somewhat differently than the Mikrokosmos; rather than being a graded set of pedagogical pieces by one composer, this is a grab bag of short pieces by a group of different composers, pieces of varying degrees of difficulty and coming from different stylistic perspectives. This is why I decided to simply order them alphabetically by title, rather by some other much harder to articulate criterion. My hope is that musicians interested in exploring the instrument will be able to open to any random page and find a piece that is a useful starting point.

Fortunately, I still have unusual friends: some old friends and some new friends that I’ve made just through this project. I am absolutely thrilled with what these friends have come up with; the range of approaches, of sounds, of musical sensibilities, of delightful misuses of the instrument, all add up to a collection that is for me full of beauty and surprises. I am grateful to them all for diving into this project with enthusiasm and thoughtfulness, and hope that musicians find these mikroetudes as useful and inspiring as I do. 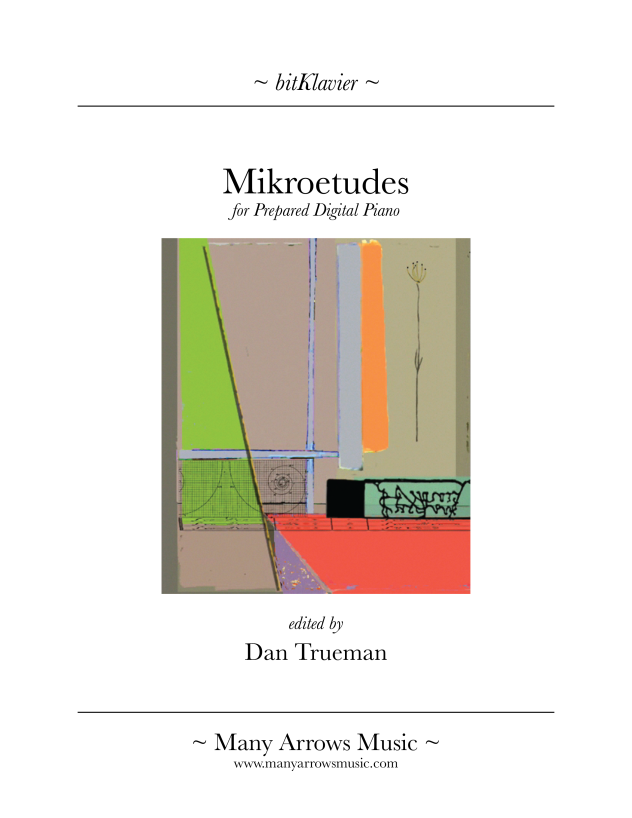