“The études, some fast and virtuosic, others spare and introspective, unfolded to beautiful and haunting effect in a haze of pitch-bending, echoes, distorted rhythms and eerie timbres.”
—Vivien Schweitzer, The New York Times

The complete book is available digitally here, or you can purchase a handsome hard-copy here.

I started writing the Etudes for myself to explore some of the possibilities of the prepared digital piano in a focused manner. I had used versions of these sorts of “instruments” or “machines” in various ad hoc ways in a number of pieces with larger ensembles, but felt that I might find some things by limiting the field a bit. I didn’t imagine that these would become anything more than fodder for other compositions, but they proved much more interesting (to me, anyhow!) than I had anticipated. I think it is likely obvious that the Ligeti Etudes were on my mind, but I also found an unexpected resonance with much older music (Bach in particular, but also fiddle music), mostly in how I engage with that music—at home, alone with the piano or fiddle, not performing, just exploring, practicing (in the broadest sense of the word). It seems odd to me that this way of engaging with music—which is how I spend probably 95% of my musical energy—receives so little attention; performance, presentation, personality dominate. But I digress!!!

To learn more about each of the etudes, read on.

The preparations for this etude are silent when any of the piano keys are depressed. When two or more keys are released, 16th-note synchronic pulses, accented into groups of 4 and running for 4 beats begin (single notes do not trigger synchronic pulses). Also, when any key is released, a nostalgic note begins, sustaining for the duration the individual keys were held. This etude is a bit didactic in this regard; for instance, mm. 72–84 (starting at around 2:56 in the video) are all about gradually adding pitches to a long sustained sonority, and then hearing those pitches swell and peak one by one. This didactic quality, along with its focus on a single set of preparations, is one of the reasons I think it functions well to start, as a sort of prelude.

I grew up near the Long Island Sound and would regularly spend time there, letting the variable tides push and pull at my ankles, mixing and shaping and sounding constantly and patiently.

This feels like a simple fiddle tune, and who knows, maybe it is and I’ve forgotten where I learned it. It’s also impossible on a conventional piano; the tuning, of the 7th in particular, and how the tuning changes, is part of the tune; these aren’t notes that deviate from some equal-tempered norm—they are their own good notes just as they are thank you very much.

The little bits of rubber that racecar tires shed while turning are sometimes called “marbles.” Sonically this seems about right for this etude, but I also like the racecar driving metaphor; the driver is not expending energy directly to drive the car, but is rather virtuosically handling a powerful beast, sometime slowing it down, pushing it one way, using the smallest muscles as well as the largest. We should have more musical instruments that are like racecars.

This began as an exploration and retuning of a particular pair of sonorities from a record by the wonderful Norwegian “jazz” composer and pianist Christian Wallumrød. It also has a sense of majestic and slow oozing urgency, something I hear in Wallumrød’s music.

The simplest preparation: a single, very quick metronome strike (well, and some tuning action in addition), perhaps a bit like a paddleball. Perhaps it is the implied neglect of such a lightweight preparation that makes this etude occasionally cranky.

Systerslått is one of a set of Norwegian Hardanger fiddle tunes that are particularly ancient and mysterious, both in terms of tuning (it is usually played in an unusual scordatura with a major-6th between the middle strings) and groove (it is a telespringar, a type of Norwegian dance that feels oddly wobbly and disorienting to the uninitiated but feels great to those who dance it). In this case, the groove becomes especially mysterious as bitKlavier and Adam negotiate, much as dancers and fiddlers do…

I originally composed a version of this etude for Symphony of W’s, for the Crash Ensemble. More theft here, in this case from a Bach chorale that has been fodder for a number of composers over the years, most notably Berg, in his violin concerto; unlike in the Berg, however, I think the Bach is transformed beyond recognition here, for better or worse. 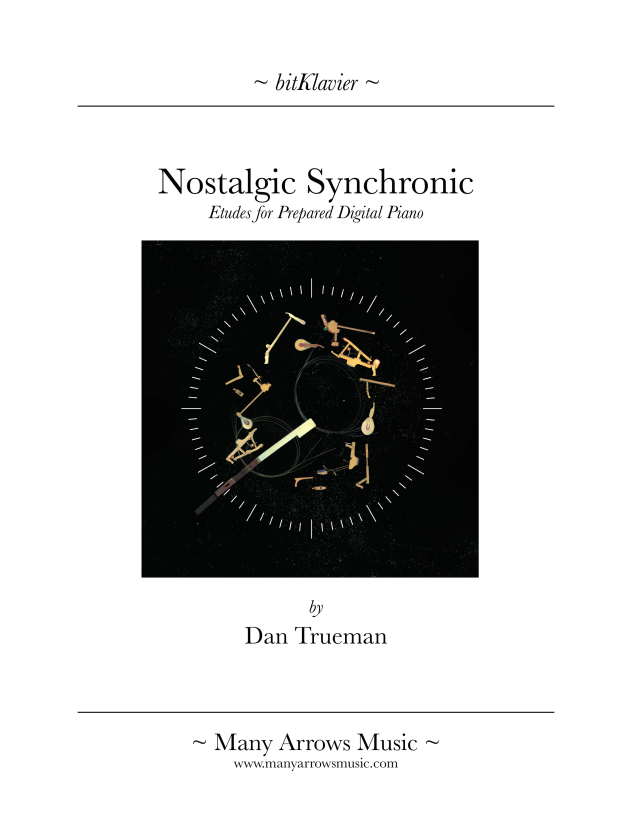